How Paul Kimmage changed the game of cycling journalism 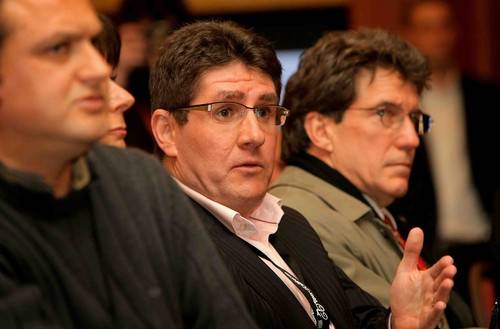 In 1990, Paul Kimmage stuck his head above the parapet and published his account of his time as a professional cyclist, Rough Ride

In 2011, Kimmage once again changed cycling journalism in a fundamental way. Except it went largely unremarked.

“P.K Okay, I’ll call you tomorrow. Do you have a preferred cycling website in the US for the transcript? I like the NY Velocity guys.

F.L I like those guys too. I hope they run it because it’s the last interview I’m ever going to do about the first 35 years of my life” – Transcript of interview with Floyd Landis by Paul Kimmage, NY Velocity

You’re thinking “how does an interview transcript on a New York cycling website change the game?”

Paul Kimmage writes for the Sunday Times. He has his own page as a columnist, something not every writer gets.

He’s one of the most respected interviewers in sports journalism and someone who most editors would fight to have on their pages. His name is a brand in its own right, a hallmark of quality insight.

He can command a pretty good wage for his work, possibly as much as six figures, and is in demand. (Paul, please feel free to contact me if I am mistaken but I bloody hope they pay you properly).

The interview with Floyd Landis that appeared in the Sunday Times Magazine was lengthy but seemed to be missing a heart. It seemed more a portrait of a man broken by the sport that helped him escape than an insight into deception in cycling.

The lawyers had clearly spent a long time filleting out anything contentious that might give rise to a libel action under English law, where the Sunday Times is published. English law is the world’s top destination for libel tourism.

He then gave away a full transcript of his seven hour interview with Floyd Landis to an American website. As far as I am aware, he received no remuneration for doing so. It’s the top hit on google for “Landis Kimmage”.

(UPDATE: Andy Shen of NY Velocity has confirmed Kimmage was not paid in the comments: “Paul was not paid for posting on our site. He and Floyd just wanted to get the story out.”)

This contained a lengthy detailing of Landis’s views and experiences of doping in cycling. It included the allegation that Oscar Pereiro, the rider installed in his seat as the winner of the 2006 Tour de France, was also doping during the race.

Under English law any of the allegations would have drawn a letter from Schillings, Carter Ruck or another of the chambers who specialise in “reputation management”, threatening action. Under American law, as I understand it, Landis’ right to say these things is protected.

Before Kimmage did this the tradition was that you didn’t release transcripts in full to show what had been taken out. You certainly didn’t give away your big lines for free because your bosses thought they were legally awkward.

I don’t do it with my interviews, no one I know does unless it’s to rebut claims of misrepresentation.

Maybe Kimmage agreed this with Floyd, maybe he agreed it with his editors. But it’s highly unusual for big publications to let that sort of stuff slip out for free in case it proves lucrative later.

What Kimmage changed was the cowardice that says you accept your editor’s decision on what to publish and where to publish. Now every journalist needs to accept that if you value your story and your audience, there is always somewhere it can be published.

Kimmage’s actions say that, in the new devolved digital era, there is no excuse for omerta on the part of the press.