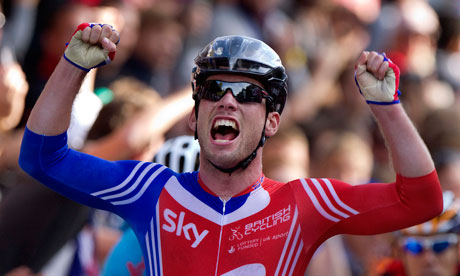 Mark Cavendish celebrates as he crosses the finish line at the UCI Road World Championships in Denmark. Photograph: Thomas Sjoerup/AP

What more is there to add? There have been few more impressive displays of teamwork in the history of the Worlds.

Lionel Birnie wrote about Project Rainbow, Rod Ellingworth’s plan, in 2008, when pretty much everyone in the world thought Great Britain would never really challenge the big nations on the road. Well on Sunday, they didn’t so much challenge them as stuck their collective dick in the mashed potato of the received wisdom of how to win the worlds.

The Inner Ring has a very good overview of how things went from that plan to the execution.

Richard Williams in The Guardian picks over some important, but easy to miss, application of marginal gains: Skinsuits to save watts (even Jez Hunt was persuaded), time check boards in three places on course, Cavendish’s unvented helmet.

A few more things which I think contributed:

And before it gets too long in the tooth here’s some other thoughts.

Spain did it in Beijing in 2008 when both Contador and Sastre sacrificed themselves early on to set up Sammy Sanchez for the gold medal.

Great Britain used Chris Froome, 2nd at Vuelta in similar way to contain early break and fillet down the pack. Then they finished the job by using Bradley Wiggins’ awesome power to contain the attacks in the last lap. His 15km at 55kmh effort made it impossible for anyone to launch a meaningful attack.

Great Britain rode as a team for the team

On that course, it was going to be hard to stay away. Of the threats, only Thomas Voeckler made anything of a strike and even then it was too late without the calibre of rider to make it stick.

The traditional wisdom is to put men in breaks and trying to control it from there. Some people think GB would have done better follow that. Too many variables and without radios, why would you.

The huge engine of Wiggins: 15km at 55 kmh lined it out, how could anyone attack from behind that?

Captaincy on the road will count when race radio goes. David Millar was superb in judging the team effort and keeping the plan on target.

Mark Cavendish may be Britain’s first Mens’s Road Race World Championship winner since Tom Simpson in 1965, but only Nicole Cooke has won National, World and Olympic Road Race titles in the same year.