5 things you should know about that Colombian cycling kit

It’s the colours of IDRD-Bogotá Humana-San Mateo-Solgar, who the Colombian Federation proudly announced would be competing in the Giro Del Toscana

There are numerous tweets to this effect from people who have been paying attention. Lycra done as gold effect never photographs well. It’s unfortunate, but there you are. It’s not “unacceptable by any standard of decency” as the UCI boss Brian Cookson seems to suggest.

3. They’ve apparently been wearing it for up to 9 months

Here’s a picture of it being raced to victory in Colombia in August in the Carrera de la Mujer in Bogota. The rider with the bottle in her mouth is wearing it and wins the race. Here’s the report from Las Bielas 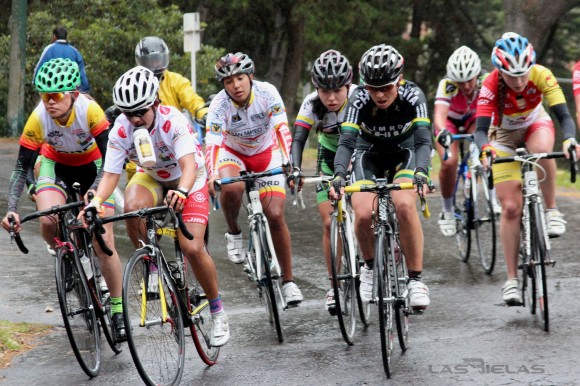 Jono Coulter tweeted this picture of the kit in El Salvador earlier this year.

4. It seems to have been designed by one of the riders on the team

ABC.es quotes several Colombia sources in its report on the kerfuffle (via Frontier Sports)

5. There is still no minimum wage for women in professional cycling

Events deemed “Women’s Elite” – like the Giro del Toscana at which they were competing –  are roughly equivalent to the top two tiers of the men’s sport.

In 2011, second tier men’s teams were required to pay a minimum around 32,000 euro, according to the Inner Ring. A woman who wins every event in their top tier World Cup Series probably would fall short of that sum in prize money.

Most women in the top tier of professional cycling aren’t even making what most countries would describe as a minimum wage.

So you can be outraged by an unflattering photo.

Or you can be outraged by the fact that the people running the sport still haven’t bought forward meaningful change to ensure that women are not on the end of enduring sexism in the sport where their right to a fair wage for a professional job is still considered less important than the design of their kit.

There were an estimated 70,000 pedestrians injured in crashes in 2015, compared to 61,000 in 2006 — a nearly 15 percent increase over ten years. Furthermore, we know from research into hospital records that only a fraction of pedestrian crashes that cause injury are ever recorded by the police. The raw numbers hide many trends, truths, and lessons, and they present a wide range of questions: Is walking more dangerous than other modes of travel? Is walking getting safer? Who is getting killed in pedestrian crashes, where, when, and why? Ladah Law Firm works with folks who’ve been injured in bicycle accidents in the Vegas area.