So there was Leopard Trek, a laughable example of what happens when you try to create brilliance by focus group. And there was Radioshack, a magnificent monument to the total indifference of Johan Bruyneel and his cohorts to any other than simple pleasure of getting paid.

One was packed with “winning talent”, but couldn’t find a sponsor. The other had a sponsor but couldn’t find a rider to go with the much-vaunted winning reputation of Johan Bruyneel. So in a marriage of convenience – and of such indecent haste that the words love, honour and obey were never uttered even by the priest – they “merged”. Which makes Flavio Becca happy as he’s got a team management that doesn’t rely on the stock availability of My Little Pony to motivate riders. 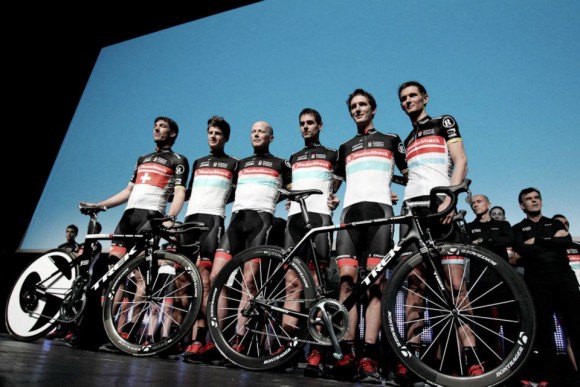 First the name. Radioshack Nissan Trek is the “they don’t have rules where we’re going” version. All it’s lacking is a ponderous “presented by” fourth sponsor tacked on the end for good measure. I flatly refuse to call them by any official designation if I can avoid it. So I present to you Radish Hack Nissen Hut. They will be known as The Radishes this season.

After last year’s attack of the clone scarves, this year saw another “everyone wearing the same casual outfit”. 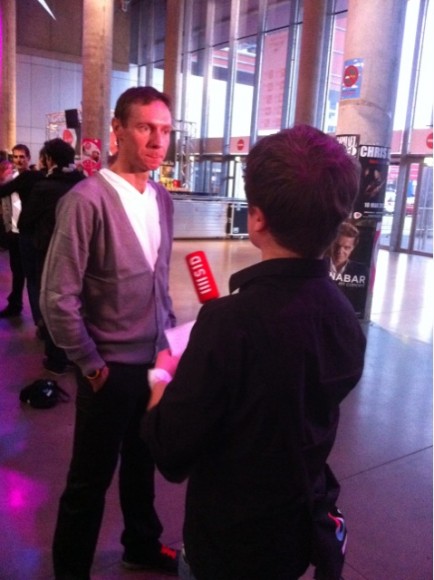 Nothing is less stylish than everyone wearing exactly the same look from one designer. It shouts “Butlins suits, you think it’s funny?” The whole point of casual wear is that it is in some way individual and not uniform, which is formal attire.

Light grey cardigans, white V-neck Tees is so middle-aged dad trying too hard. Which is an accurate description of father of six and full time dog-with-a-bone war machine Jens Voigt.

Undeterred by Astana having got there first with annexing a nation for a professional team, the Radishes have thrown the retro card on the table – Luxembourg having existed as a nation somewhat longer than Kazakhstan.

Scratch that, they’ve simply figured the quickest way round the issue of Radioshack’s brand colours being red and their existing design being baby blue is to stick another stripe on, along with the ubiquitous “cancer shield” livestrong band. God only knows how many brand identity consultants that solution took.

NY Velocity tried to find something palatable in the team presentation but ends up leaving it all on the plate.

Meanwhile over at the home of over-earnest hyperbolic press, Team Sky, the thin blue line between winning and losing seems to become a rather thick band. 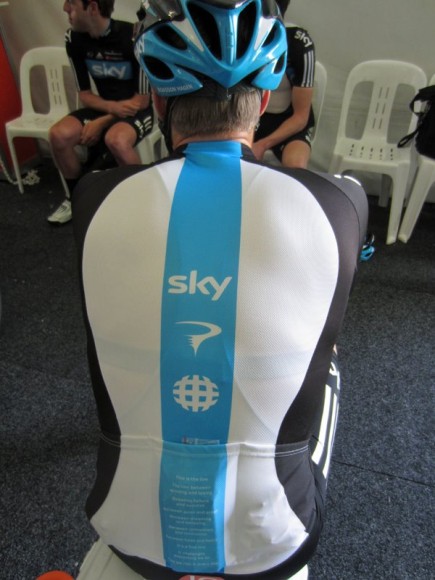 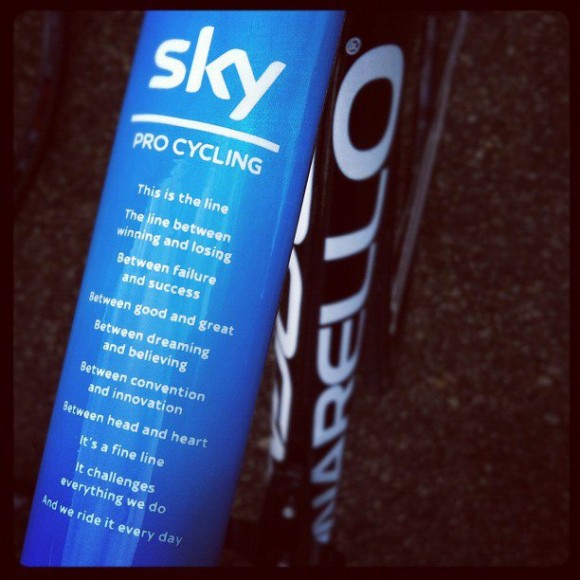 "This is the line" - Team Sky bike by Kristof Ramon

If it’s a fine line between success and failure and we ride it every day, then Team Sky seem to have decided to take to the cote d’azur this year for a whole lap of FAIL. And there’s a bloody long way between winning and losing compared to 2011.

Still, at least it means space for the News International logo (it’s the one that looks like a portcullis seen through a fisheye lens) to slip on to the jersey in time for the Olympic year.

So now you know where all that money the Murdochs saved when they closed the News of the World went: fatter blue stripe and Mark Cavendish’s monthly cheque and the hope of basking in the reflected glory of gold.

This season Sky will probably concede the lead in sending out absurdist jokes as press releases by Green Edge, whose press to date seems to be one long folly based on the reinforcing every Aussie stereotype going. Here’s some sample copy from the official Green Edge cycling site:

“… to find the edge in every aspect of our sport, stretch it, explore it and push it forward. That’s where we’re coming from.”

Exquisite corpses is a wonderful parlour game, but it’s no way to write copy.

Green Edge have also successfully lowered the bar for professional team kit right down past “cookie cutter club kit with less than no thought” to “Jerry Ryan’s picking up the tab, so it can’t be any less aesthetically pleasing than a Jayco caravan”.

Gradient fades? Nobody has thought them a sensible design cue since Paintshop Pro was considered a viable alternative to Adobe Photoshop for design work.

This entry was posted in Professional and tagged Leopard Trek, Radioshack-Nissan-Trek, Team Sky. Bookmark the permalink.