Does British cycling have a problem with women?

Nicole’s article contains a more analytical and well-evidenced case. That GB’s women did not have access to the ultra-aero UKSI bikes for London 2012 road races, what can you say?

Look at the gold medal potential in that women’s squad  – Cooke, Pooley, Armistead – versus the men – Cavendish.

Now there is a case that until 2012, British Cycling’s progress was hampered in previous cycles by inequality in events on the track.

If you look at the depth and breadth of support offered to Bradley Wiggins over his career, you can see this illustrated

@leguape WEll, to be frank, Alex, prior to 2012 they did, because there were twice as many medals to go for. Wiggo brought 4 OG golds. VP 1

We’re now two full Olympic cycles on from Beijing 2008, eight years in which to effect change.

And we’re still hearing the same criticisms from female athletes and an absence of a visible female presence in senior leadership roles within the organisation.

But discussing British Cycling in isolation is rather like worrying about a puncture while ignoring a buckled wheel.

There’s a long and deeply entrenched sexism in cycling as a whole. It’s going to take a while to equal things out.

So establishing a Women’s World Tour is a step in the right direction on the road.

But the absence of a clear plan to phase in minimum wage equality as part of that project represents a massive missed opportunity.

Effective change is rarely comfortable for existing stakeholders – it shouldn’t be – but it demands a degree of ambition and disruptiveness that goes beyond what we’ve seen so far.

For me, Cookson’s new UCI, lacks the willingness to be disruptive in a meaningful way for cycling. Bradley Wiggins argues this in a recent Procycling interview. 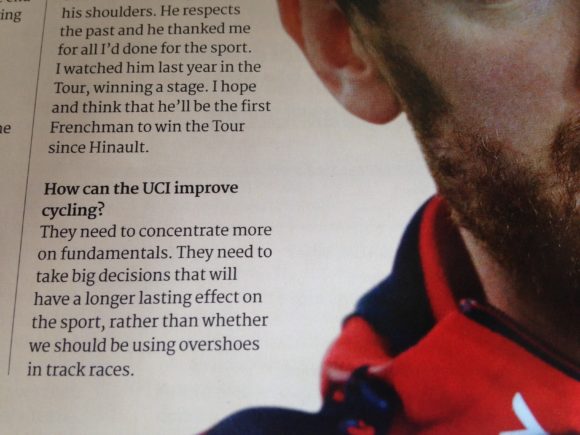 And that ripples all the way down the sport.

We’re too far in to the current Olympic cycle for Rio to really do anything meaningful. So we have to look to Tokyo 2020 as the point at which we can deliver something substantive.

Quotas are ugly tools, but in small workforce populations, they can even up the odds and create the environment for transformation. Elite sport is one such environment.

To reach a goal of 50% of women’s Olympic Podium Programmes (OPP) on the track – endurance and sprint – being run by women would require one appointment over four years.

Does anyone this is unrealistic?

You can run all the Breeze rides you like, but if women don’t see a place for themselves at the top of the sport, then you will never fix the problem.