If Svein Tuft didn’t exist then someone would have written him into the literary history of cycling. Juliet Macur paints a beautiful portrait in her New York Times article ‘Canadian Rider Has Made Unorthodox Climb to the Top’. 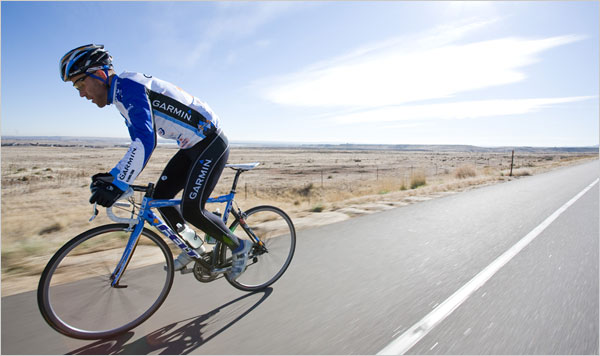 In an era where British Cycling is deciding who will become a champion at an age when riders haven’t even had the chance to taste champagne, it is incredibly refreshing to see a rider being written about who has come to the top level by conscious choice rather than predestination by others. One thing is certain: wherever he rides this year Svein (pronounced “Swayne”) will be a favourite with the fans.

I put this vision of “Un Rouleur Romantique” out there the other day and my good friend Steff picked up on it as we talked about the article:

Steff: “Hard to see how you’d get more romantique than that biog”

Me: “Well short of having spent his early life working the fields of his parents’ farm in the Auvergne/in the pits of Flanders, there’s isn’t much is there? The dog in a trailer and “we will never be here again” are pretty much the sort of thing that Goddet and the great writers of the 50s would have adored mythologising.”

There’s not enough riders who we can identify with as fans. A rider like Tuft who rode his bike for adventure and escape is someone we can all feel close to in spirit as we all ride in some measure in pursuit of those. Equally a man who walked away from professional cycling because of his distaste for doping strikes at the heart of how a good proportion of fans feel about the sport.

His story feels out of place in an age of press release journalism and every race being available in pictorial form. In the press age, before the dawn of live television coverage, Tuft would have found himself eulogised in the same way as Jean Dargassies and many others whose tales were written as if they were heroes of romantic literature, with a healthy disregard for the hard facts.

As it is, we can still eulogise a guy who lost last year’s Time Trial at the World Championships to the misfortune of a puncture and lack of a spare TT bike. Now if that’s not a chapter to be written, then perhaps we have lost sight of what there is to love about cycling.