The myth of the green cyclist

There are many stereotypes which come up time and again when cycling is discussed: red-light jumpers, lycra louts, mid-life crisis on carbon and – the one I hate the most – the environmentally-aware commuter.

It comes up, alongside the others, in a BBC News article on the whats and wherefore of proposed legislation to add the offence of dangerous cycling to the statute book (I assume this will apply only to England and Wales):

“To their supporters, Britain’s bike-riders are clean, green, commuters-with-a-conscience, who relieve congestion on the nation’s roads while keeping themselves fit.”

My experience is that environment and congestion are usually distant cousins to keeping fit. And those three are usually some way behind at least another two reasons: convenience and cost. And that’s without mentioning enjoyment.

For anyone living and working in London, within Zones 1 and 2, a bike makes compelling sense for so many reasons that the environmental worthiness is hardly worth invoking.

A sample journey, not disimilar to one I might make from home to BBC Broadcasting House. 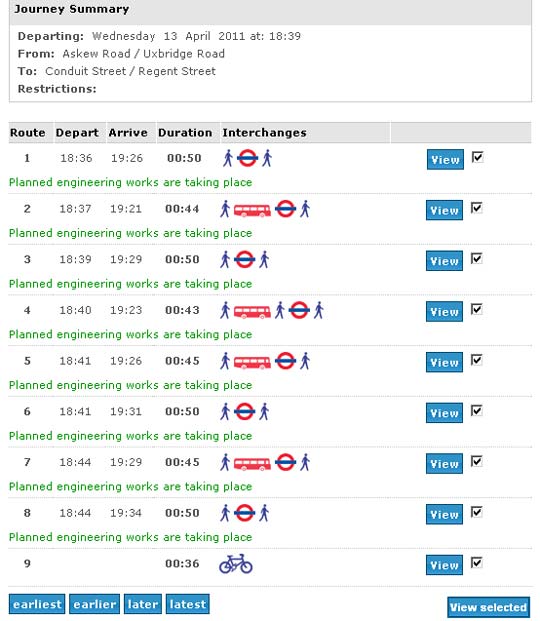 Yes, the TfL journey planner can be somewhat questionable in its routing. But it says that cycling saves you roughly 10 minutes on your journey. As the site says, quickerbybike.com

It’s a direct journey, no changes, with about a third of the journey possible on shared use paths free from motor traffic – through Kensington Gardens and Hyde Park. That has got to beat the inside of a tube tunnel for enjoyable scenery and there’s no waiting for buses or tubes.

£2.20 saved at the very least over the tube or bus single fare. Fuel and congestion charge if you were going by private car. About £15-20 if you were taking a taxi. A £300 commuter bike, ridden to work every day repays its cost in a month and a half relative to the cost of a Zone 1-2 monthly travelcard.

As a veteran of the Woking-London Waterloo commute and Barons Court to Westminster on the tube, I think I can safely say there is very little to enjoy about either of those journeys.

(As a footnote, I did Woking-London back in the days when there was a guards van and anything up to 50 bikes on the train and the carriages were slam-door ones. Is it wrong to believe that that was the last era in which commuter trains were bearable?)

Overcrowding on public transport in the UK means I could never enjoy commuting. The same applies to a huge number of people I know who choose to cycle. That time on the bike can be the most enjoyable period of the day.

I know plenty of racers who use their commutes as supplementary opportunities for training. It’s a good use of time otherwise wasted. My 5 minute ride up the Uxbridge Road presents no training other than handling.

I do know plenty of people who cycle because it’s the best chance they have to fit some exercise into their weekly routine. It’s not hardcore aerobics they’re after, just some nice gentle exercise that allows them to enjoy a good bottle of wine at weekends without worrying about the weight.

People ride bikes for pretty much the same reason others choose to invest in a scooter: You’re less likely to spend unnecessary time sat in traffic watching the cost mount up. It’s that simple.

Nobody I know has ever said to me “the reason I ride my bike is because it’s good for the environment.” It’s just not there.

There’s plenty of advocates talking it up on sites and in the news agenda but, simply put, it’s a fringe benefit for most people who use a bicycle.

This entry was posted in Commuting, Culture, Journalism, Opinion. Bookmark the permalink.