At last my dream bike is complete: A Pegoretti Marcelo. It’s to bike ownership what a Chanel 2:55 is to handbags: a timeless classic piece of artisanal craft whose quality is evident but not showy. 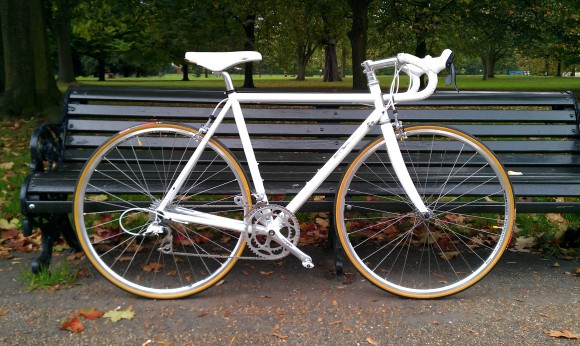 Ordered in January 2011 and finally delivered today, it’s been a lengthy process but never a fraught one thanks to the charm and good humour of Roger Graver at Mosquito bikes.

I went with stock geometry as the wait time for a custom one is nigh on two years now. Plus I’m not really a custom geometry. I’m a pretty standard 52cm frame sort of shape.

I’m aware that this is the last of its generation as Dario Pegoretti has changed his design for the Marcelo this year in terms of tube shape and diameter. I really wanted this classic style and so was easily persuaded by Roger to go for this over a Duende, despite it costing a bit more.

I wanted a white bike because they look good and go faster. And I also wanted a personal touch. So I asked Dario to include a quotation from the Italian humanist writer Renato Serra who was killed during World War One. 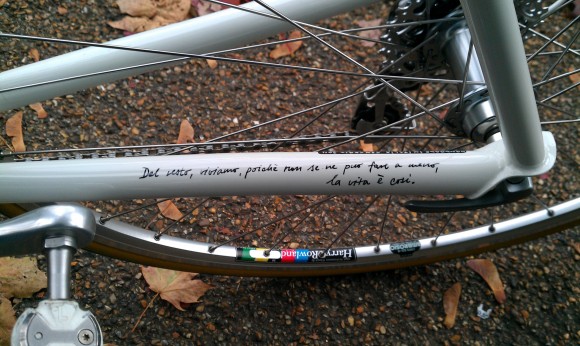 It comes from Esame di coscienza di un letterato and reads in the original:

I first read it in Passion and defiance: film in Italy from 1942 to the present, By Mira Liehm, where it appears at the beginning of the chapter Obsession as part of a much longer quote and is applied to the yearnings of the neo-realist cinema movement. It is translated thus:

“And we live because we cannot afford not to, because that is life.”

I’ve always felt it’s something to be reminded of on a daily basis and being an Italian quotation, it felt right to have it on the bike. I hope Dario appreciated the sentiment of it.